​
​​​The Healing Clinic Collective is proud to have been built with the work of some of the Bay Area's most radical, loving healers and organizers. When we began our work in 2013, our first 2-day healing clinic was organized by Carla M. Pérez, Atava Garcia-Swiecicki, Angela Angel, Sara Flores, & Suzanne Snyder. Although it was not called the "Core" at the time, this original organizing committee brought the HCC's vision and our model of ceremonial organizing to life for the first time!

In 2014 we began long-term planning and developed our Core Collective structure. The Core then became Carla, Atava, Sara, Suzi and Summayah Franklin. Tre Vasquez then joined the Core in 2015.

​We are so thankful to these foundational members of the Healing Clinic Collective! We wish many blessings upon their life-work and look forward to continuing our relationship with them as leaders within the HCC Network ! 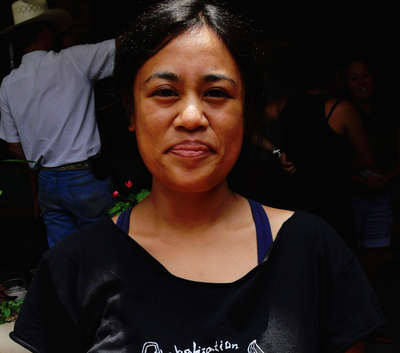 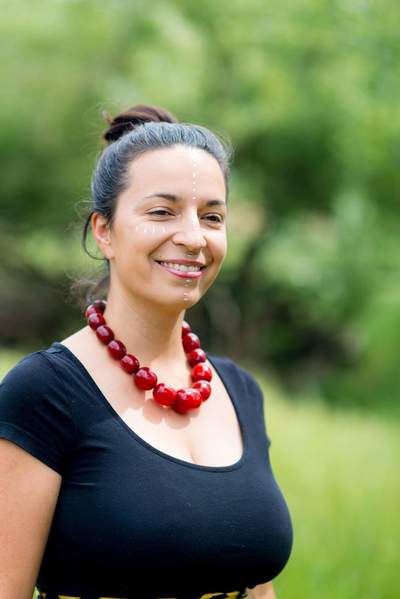 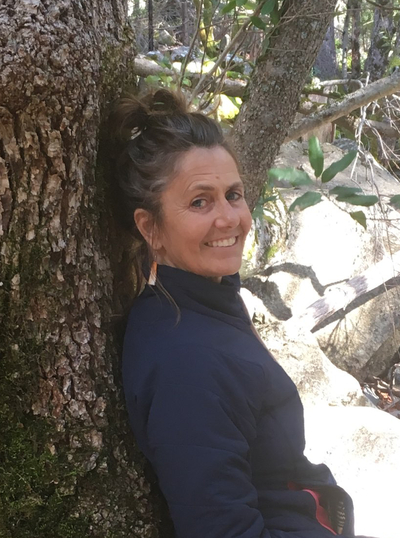 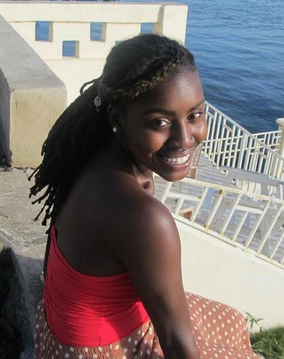 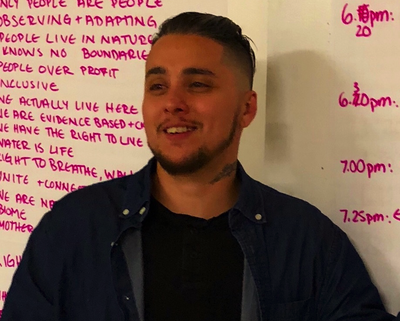 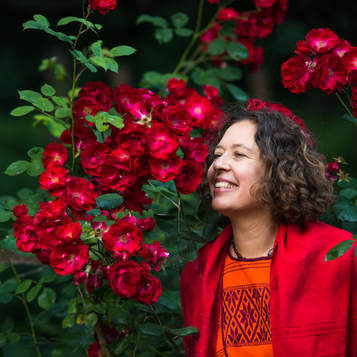 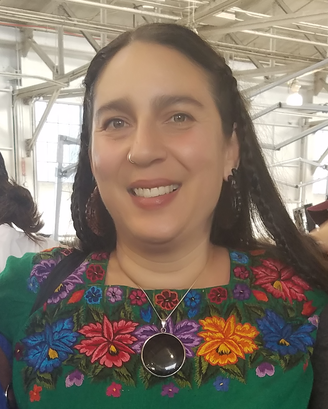 ​Carla is a dedicated mother and community organizer of Native Mezo American and Spanish heritage residing in Oakland, California. She graduated from UC Berkeley in 1999 with a BS in Conservation & Resource Studies with an emphasis on Environmental Racism. She has worked on issues of environmental justice and sustainable agriculture with community groups from Yucatán, Mexico to Bay Area environmental justice communities such as Richmond, East Oakland and Bay View Hunters Point in San Francisco.

Prior to joining Movement Generation (MG) in 2007 as a co-founder of the Justice & Ecology Project, Carla spent 8 years as staff at Communities for a Better Environment (CBE). She is certified in Popular Education Training and Indigenous Permaculture Design. Carla also actively organizes in her spiritual community, convening women’s circles and leading or participating in rites of passage and prayer ceremonies.
​
​Today, Carla continues to be a member of the MG collective in addition to being the founder & Lead Coordinator of the Healing Clinic Collective. She is dedicated to developing her healing and spiritual work including studying with her teachers around plant medicine, prayer, energy healing and the traditional Mexican temazcal.

​ Carla’s hard work is done in dedication to her parents, her daughters and to the Spirit of Creation. 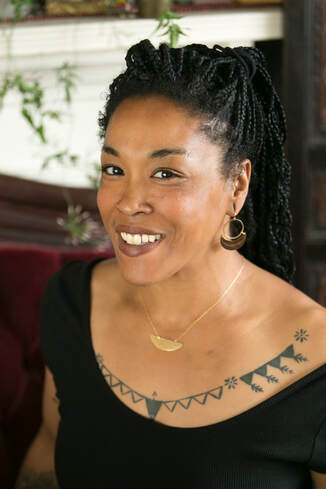 Abi Huff
Admin & Program Assistant
(she/her/they/them)
​
Abi Huff is an ever- evolving community & clinical herbalist, Herbal Educator, medicine maker, intuitive, community activist, and overall plant nerd. Her passion lies in connecting people to their inner wisdom, and responsibility to the planet and each other through gratitude for, and relationship with the plant kingdom. Acknowledging our ancestral connection to the medicinal, spiritual, and cultural uses of plants is, in her vision, the foundation to understanding plants as medicine and inspires a deeper connection to the magic of our amazing planet.

​Abi’s work is rooted in radical resilience and self care, celebration of our ancestral bloodlines, and herbalism as an act of reclamation, ancestral healing, and community activism. Abi has been seriously holding plant medicine for fifteen years.
​ 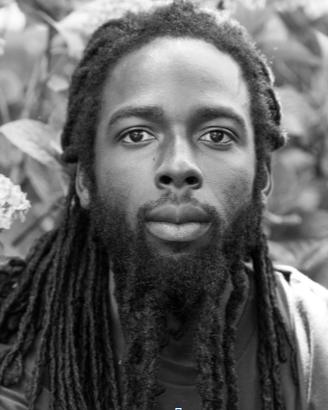 ​Raised in Baltimore MD, adélàjà simon is a first generation U.S.er of Yoruba, Ayisyen and Arawak/Taino descent living and offering a deep exploration of the question, ‘What does a truly regenerative, purposeful and place-based human lifeway, rooted in ancestral praise look like, feel like, and take to create and sustain?’

The process of chewing on this question is bringing forth the work of emergeazurescens, integrating modalities of bodywork, somatic healing, dream work, Holistic healing, grief work, Permaculture, ancestral arts, and processes for mapping the human psyche and framing the stages of human development.
​
adélàjà lives in Oakland CA bringing forward this practice, working with the Growing Together Project, and building community at Nafsi Ya Jamii.  ​​ 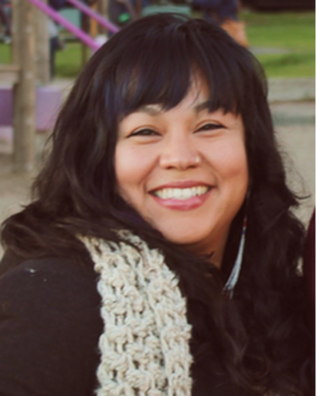 ​Angela is life-long student, mother, and health worker with a passion for learning and teaching others about sexual and reproductive health/care/justice, self-healing, and healing our communities. She is a full-spectrum traditional birthworker, supporting people during moontime/menstruation, miscarriage, abortion, labor, birth and parenting. Angela incorporates the teachings of curanderismo and her ancestral indigenous knowledge in all her offerings; from plants and palabra/laughter, to massage and gentle herbal teas.
In 2013 Angela co-founded Nueva Luz Birth and Family Care alongside her birthworker sister, Alejandra Olguin. Together, they consult about and facilitate womxn's healing circles and community workshops in the Bay Area on the interconnection of self-healing, birthwork, and curanderismo.

As a parent, partner, and community member, Angela is dedicated to teaching and promoting radical social justice principles based on teachings by communities of color and local and global indigenous knowledges. Her commitment to ensuring that mental/physical/spiritual/environmental health are understood in relation to one another are based on her foundational intention of passing this knowledge to the generations that follow, and reigniting the memories and knowledges of those that came before. Angela also teaches reading and composition at UC Berkeley in the Chicanx and Native American Studies Programs.
​
She is a proud community college transfer student who graduated from UC Berkeley with a B.A. in Ethnic Studies and Anthropology in 2009, holds a Master of Arts degree in Ethnic Studies and a Master of Public Health degree, and is currently completing her PhD in Ethnic Studies. Angela is excited to have joined the HCC Core in 2018!

​marie brings over 40 years of japanese zen-based practices to her reiki table and meditation cushion.  a daughter of immigrants, she grew up in the suburbs (torrance & gardena) of LA and is a second generation Japanese american queer activist and reiki master & teacher.  she received her level 1 & 2 reiki training in geneva, switzerland and later received her master reiki training in san francisco. her formative years were steeped in japanese culture which included daily japanese school as well as rigorous training in chado (the way of tea) and ikebana (or kado aka the way of flowers). those early years were critical in shaping her sense of aesthetics and cultivating a deep appreciation for ritual, form and the ways of nature. marie has a private healing arts practice in both san francisco and most recently opened a new practitioner home in downtown oakland where she’s been gleefully busy with new clients. she also has a long history and deep connection working with the LGBTQI and POC communities where the majority of her clients are from. marie also works extensively with oncology clients both in person (at homes and hospitals) as well as remotely with folx from around the world.
​
In her reiki practice, marie incorporates various tools and teachings including sound healing, crystals, plant medicines (which she often grows and harvests for ceremony and healings) and brings in the ways of her two-spirit Lakota Sundance community for whom she feels deeply honored to serve as their fire chief during the annual Sundance Ceremony.
Prior to founding STARNATION REIKI, marie co-founded the berkeley-based Center for Transformative Change with rev. angel Kyodo williams, a residential “transformative practice community” rooted in the practice of zen meditation, supporting primarily activists and people of color bridging their outer and inner worlds through meditation, yoga, and inner awareness practices. marie has been a practitioner in the HCC network since 2014 and is looking forward to being part of the Core in 2018.

​And finally, marie feels most alive and happiest off grid, basking in the magical light and medicine of sacred places between heaven and earth. 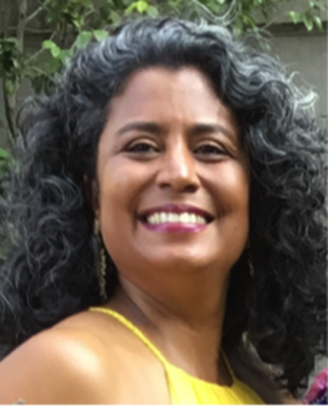 ​Rachel, with her lived experience, believes in the innate wisdom and intelligence of all people to be healers and to heal themselves.  She serves as an Assistant Professor in the Master’s in Counseling Psychology and Undergraduate Studies Programs at California Institute of Integral Studies where she has helped educate and launch the careers of hundreds of new and diverse therapists.  Her pedagogy and therapeutic practice are rooted in Black, Indigenous and Liberation Psychology.  Rachel has been working in public and community mental health for nearly two decades.

At the first HCC clinic in 2013, Rachel’s experienced a life-altering new model to deliver mental health care services that united counseling, mother wit and culture.  She is fully dedicated to working alongside others to heal the soul wounds of poverty, violence and addiction in our communities.  Rachel is a dedicated mother, healer and educator with roots in South Berkeley and East Oakland. Rachel is excited to have joined the HCC Core in 2018! 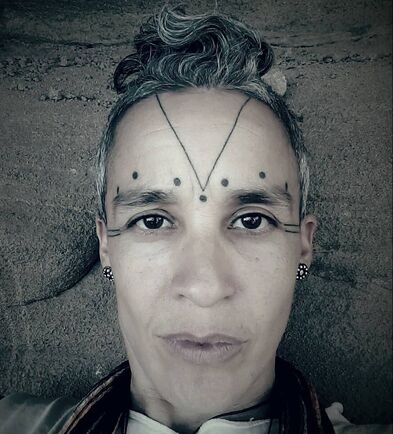 Our newest core member, RaheNi Gonzalez I'naru is a Two-Spirit Boricua Taino Ceremonialist, Sacred Artist, Healer & Activist. They are committed to healing the earth, the waters & our collective wounds of colonization, modernization & industrialization. They are  passionate about creating sacred space & altars dedicated to ancestors & community healing.They have taught meditation in many settings including prisons and to women with cancer. As a caregiver, they have helped many in their journey to the other side. They have completed a year long Mindfulness Yoga & Meditation Training, a year long intensive in Commit to Dharma and a year long intensive in the North American Nonviolent Communication Leadership Program. RaheNi has over 2 years of accumulated silent retreat practice, they have completed 4 traditional vision quests & 20+ years of Indigenous ceremonial & Vipassana practices. They are also a Master Gardener & Indigenous Permaculturist.